“Take it day-by-day. Do what’s best for… 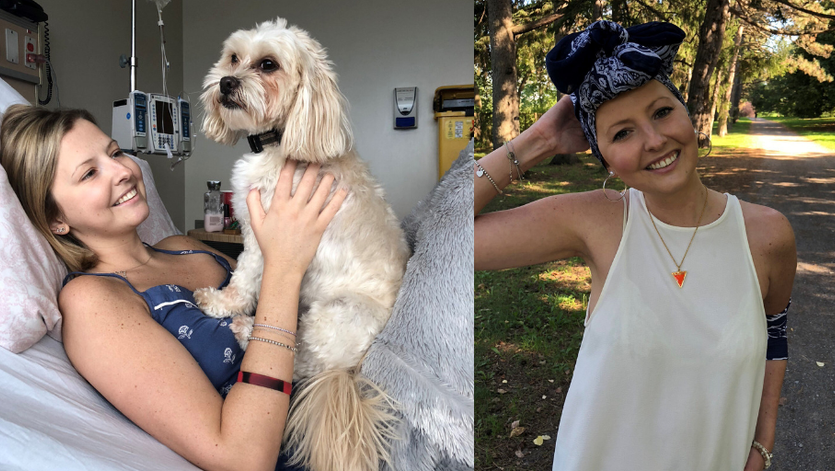 From now until the end of the year, you can buy an eyebrow pencil and give one to a woman like Jennie at the same time. For every Brow Power Pencil sold, IT Cosmetics will donate one to Look Good Feel Better, helping women with cancer feel like themselves again. Get one to give one!

One year ago, Jennie had just returned to her hometown of Napanee, Ontario, after a year teaching English in the UK. She was 25-years-old and supply teaching locally when she came down with what she thought was the flu. Living in a town without a walk-in clinic, she made a trip to the ER after becoming concerned with how tired and short of breath she was feeling.

The ER doctor confirmed that what she was experiencing were likely symptoms of the flu. To be cautious, he suggested that Jennie make an appointment with her family doctor if her energy levels didn’t improve after another week.

A few days later, when she couldn‘t stand for more than 10 minutes without becoming short of breath, she booked an appointment. It was Easter weekend. Her doctor took a number of blood tests and sent Jennie home to rest and enjoy her weekend. Later that same day, she had an unexpected home-visit from her family doctor, who informed her that Leukemia cells had been found in her blood work.

Things moved quickly as Jennie was admitted to hospital that Monday morning for 28 days of intensive chemo, followed by a bone marrow biopsy which confirmed she had ALL (acute lymphoblastic leukemia). She also learned that she had a mutation called the Philadelphia chromosome, which caused complications and meant that her treatment would include a bone marrow transplant to decrease her chances of recurrence.

While overwhelmed by the whirlwind of new information and treatment options, Jennie found herself underwhelmed by the resources available for young women like herself, who were just beginning to navigate a cancer diagnosis. It was at this time that her social worker at Kingston Hospital told her about a program called Look Good Feel Better.

“It was just over a month after I had been diagnosed and I had just finished my hospital stay for intensive chemo. I had lost my hair – which was a big deal to me – and I was still going back in once every other week for maintenance chemo,” Jennie remembers.

“The room was full, with just over 10 of us there for the workshop and I was surprised to see women of all ages. About half the women were closer to my age,” she says, “It was the first time I was able to connect with other women who could relate to what I was going through. I remember I was wearing my wig and one of the women said she completely thought it was my real hair. It felt so good to connect with others who just got it, without the pressure of trying to.”

Aside from the chance to connect with other women, Jennie also remembers how nice it was to feel “pampered” for the first-time during treatment.

“It was such a different feeling of being cared for – it was almost like we were being spoiled. Although I had spent so much time being looked after by my medical team, it was the first-time during treatment I felt cared for in that way.”

It was important to Jennie that she felt in control of her appearance during treatment.

“Your looks will change. Everyone’s experience is different, but for my own, it was so important to be able to go out in public and live my life without having people look at me and immediately know I was in treatment. It was a huge part of helping me feel normal.”

This notion of ‘feeling like herself’ is something Jennie carried with her after her experience at the LGFB workshop. She continued to play with her style and look during treatment, calling it her “cancer glam.” Her mother even made her custom PICC line cover sleeves in different colours and patterns to accessorize her outfits.

“When I accessorized with my sleeve and different scarves and wigs, it made it easier when people would ask about it. It was like they were asking me about this unique accessory, not questioning me about something that I needed because I had cancer.”

Jennie was fortunate that once it came time for her bone marrow transplant, her younger sister was a 10-out-of-10 match to become her donor.

“It was never a question of whether or not she would do it – it all just happened very smoothly.”

Extremely grateful for the bone marrow transplant that saved her life, Jennie wants to educate others on what it takes to become a donor – and possibly save someone ese’s.

“Before my transplant, I never knew how easy it was to become a bone marrow or stem cell donor. There are two different ways to recover the cells, but in many cases like my sister’s donation, it is done with the first method, which is non-surgical and painless – almost like a more complex way of giving blood.”

Since witnessing the power of her transplant, many of Jennie’s family and friends have stepped up to become donors themselves. Her boyfriend registered when they learned that donations from young males are particularly in-demand.

“I’m now 8-months post-transplant. My immune system might be like an 8-month-old baby – I needed all my shots again – but I’m doing great,” Jennie jokes.

When asked about other young women who are currently navigating a cancer diagnosis, Jennie has some advice: “Take it day-by-day. There’s a lot of pressure to feel positive, but don’t feel guilty about feeling all your emotions – the good and the bad. When it comes to the physical changes, do what feels best for you. Take advantage of supportive programs like LGFB that are out there to help you. Go to a workshop. You deserve to be spoiled.”

From now until the end of the year, you can buy an eyebrow pencil and give one to a woman like Jennie at the same time. For every Brow Power Pencil sold, IT Cosmetics will donate one to Look Good Feel Better, helping women with cancer feel like themselves again. Get one to give one!