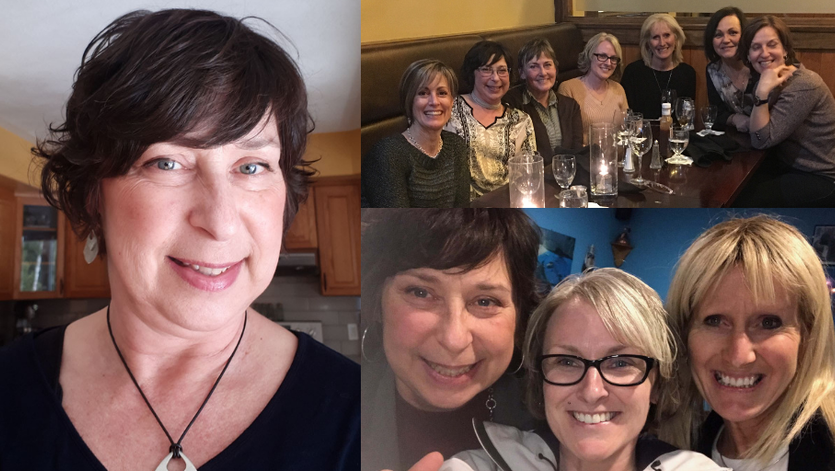 Finding friendships through cancer: "They just get it."

As a nurse, Shelley has been helping patients navigate their health for years. But when she was diagnosed with aggressive Stage 1C breast cancer in the summer of 2017, she was thrust into a system she had spent years a part of – in a very different experience.

“I had never had a health problem before my diagnosis, so hearing ‘you have cancer’ came as an incredible shock,” she shares.

Within days of her diagnosis, Shelley was informed that she would need to undergo a mastectomy followed by chemotherapy. As she absorbed the information and began to mentally prepare herself for upcoming surgery, her family physician presented her with a unique opportunity.

“My doctor reached out to me saying that she had another patient and a friend who had just received a very similar diagnosis to my own. She asked if I would like her to connect the three of us.”

Without hesitation, Shelley agreed to meet Tara and Nancy – two women who would soon become central to her circle of support.

“When we met, it was an instant connection. At first, we talked about the details of our diagnoses and different treatment options, but we soon began sharing thoughts and fears and leaning on each other for that emotional support.”

The trio became fast friends. When they started experiencing the appearance-related effects of chemo, two of them attended a Look Good Feel Better workshop together.

After a great experience with LGFB, they were eager to get involved with other support resources. The three friends were introduced to a local cancer exercise program, Stay Strong, and there they met others, expanding their trio of support to include a network of other women.

Throughout the past two years of treatment, recovery and remission, the group of newfound friends have always been connected through Facebook, texting, calling or hanging out.

Shelley explains, “If something happened in my day that would trigger a feeling I knew my family and friends wouldn’t understand, I could send those ladies a message without needing to add any context and they would just get it.”

Shelley’s group has grown as they’ve been introduced to women from many different resources – in person and online. Although some have never met in real life, they play important roles in each other’s lives.

“I met an amazing and supportive friend through a Facebook support group. Kristen and I have never met face to face but have spent many dark, late nights keeping each other company through messaging. She remains one of my close friends and will forever.”

Shelley explains that as a survivor making friendships and connections, you know heartache is possible. But when her group experienced loss, they were more grateful for each other’s support than ever.

“We have lost two others from the original group – one woman who just recently passed away. She was one month shy of five years of survivorship. It really rocked us to the core. The theory that the cancer can return became reality when we lost her. Thankfully we had each other to get through it.”

Although she has always been an outgoing person, Shelley understands that it’s not easy for everyone to ask for help or connection from others. Even so, she encourages all women navigating a cancer diagnosis to take that step.

“I was fortunate that my doctor reached out to me – I didn’t have to go looking for support. But a little part of me hopes that someone will read this and maybe they’ll ask their doctor if an introduction like the one I had would be possible, or they’ll be more confident to accept an invitation to join forums or support networks. Meeting this group of ladies has not only been one of the most positive things to happen to me through cancer, but in my life. Everyone and their experience is different – you may feel you’re someone who prefers to work through things independently, but I encourage you to reach out to other women. You can become as involved or engaged as you want, but it can never hurt to have another outlet of support.”

Although attending a LGFB workshop helped with feeling some control over the physical side-effects of treatment, Shelley struggled most with having a mastectomy.

“I think the hardest part was that no one prepared me for the emotional toll it would take. It was always referred to as another part of treatment or another ‘procedure’ – but there was so much more to it than that. Speaking through the emotional impacts with my group was what got me through it. Even more recently, when deciding whether or not to get reconstruction, neither choice immediately struck me as the right decision. It was so beneficial to have them as my sounding board.”

Now in remission and back to her work as a nurse, Shelley is just beginning to feel like the hardest parts of this experience are behind her. She knows that the emotional side of survivorship is something that will always be with her – but she doesn’t see this as a weakness.

“After cancer, you will never be the same. You spend so much time diving deep within yourself to get through the experience that you develop a new level of self-awareness. Witnessing the strength and resiliency you possess will give you a newfound confidence and compassion that completely changes your perspective in life,” she shares.

“I am a stronger person after what I’ve been through. I’m a better person. You will be too.”