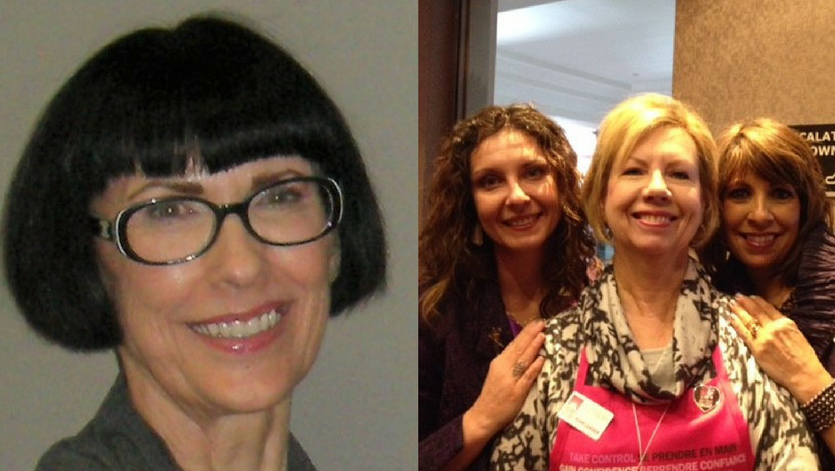 Linda Cottell and Erika Ellis, long-time Look Good Feel Better family members have been named Heritage Heroes for their unwavering support of the program for more than two decades It was the first workshop to take place in Calgary.

“All the volunteers were kind of apprehensive and nervous, not knowing what we were getting into,” recalled Ellis, who’s been a Team Lead since that day. “There were about four participants and they were as nervous as we were, because it was the first time for all of us.”

There was a lot of support in that room – not only from the volunteers for the participants, but vice versa. The air was filled with encouragement.

“It really turned out to be an amazing workshop for everyone,” said Ellis. “And 24 years later I’m still doing it.”

Not only is Ellis a long-time volunter, she's also been a Regional Manager for Look Good Feel Better, having helped recruit and train volunteers.

“I’ve met so many wonderful people,” she said. “It doesn’t matter what city you’re in, where the workshop is – it’s the same. The support from the volunteers to the participants is always there.”

One of Ellis’ most memorable moments was about 15 years ago, when someone from her own volunteer team attended a workshop as a participant.

Ellis and her fellow volunteers were unaware she was diagnosed with cancer until she walked into the session.

“Even though she knew all about makeup she saw the value in going through the program,” she said. “I think that says it all.”

“It’s about more than the appearance-related effects – it’s also about how it actually makes you feel, it empowers these women to move ahead.” “I really liked cosmetics and the idea of being able to put the two together was really good,” said Cottell.

While nothing could prepare her for her mother, sister and husband’s cancer diagnoses years later, she at least had some insight to offer from her volunteer experience.

“I could help them with a lot of things,” she said, adding that her sister attended a workshop out west.

Not only is Cottell a long-time volunteer, she's also been a Regional Manager for Look Good Feel Better, helping to recruit and train volunteers as well as develop the teen workshop at Sick Kids.

“I just believe in the program, I really do,” she said. “It is truly a privilege to be able to see the visual and emotional transformation of the women and to see them connect with other women and to know they’re not alone.”

“It’s not often that you get to see the before and after when you do a volunteer job, but with Look Good Feel Better you do. That’s so rewarding in so many different ways.”