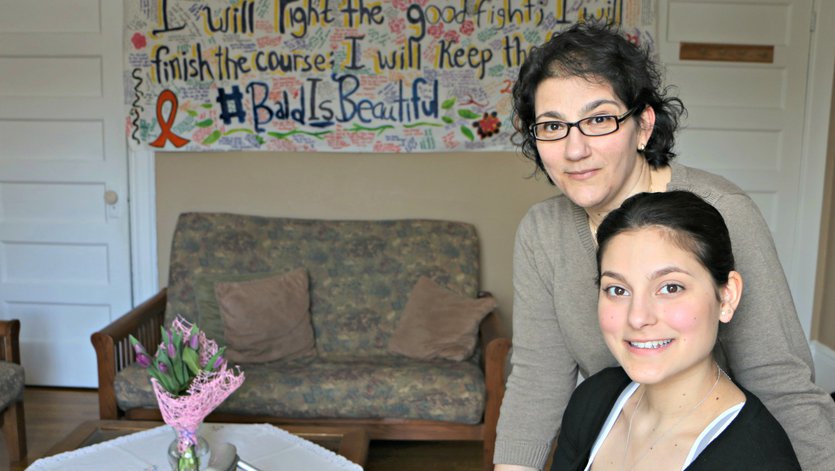 When Emily Lombardo’s teenage daughter was diagnosed with leukemia in December 2014, she felt numb.

“Nothing was registering as to what the diagnosis was,” the mother of two said from her Toronto home as she looked across the room at her now 20-year-old daughter, Adriana. “’Numb’ is the only word I can think of.”

The weekend before, Adriana, then in grade 12 at St. Joseph's College, attended her semi-formal on Friday and worked Saturday and Sunday. There were no signs of illness until she suddenly fell short of breath at soccer try outs the following week.

They rushed to the emergency room at Toronto General Hospital, where, after a series of test, the doctors said it was cancer.

“As a parent that’s hard enough to accept,” Emily said, adding that letting go of control and handing it over to the doctor, who was “a total stranger,” was also difficult.

Adriana’s cancer journey has been an “emotional rollercoaster” for them both, but fast-forward two years and Emily and Adriana appear to have daily life down to a science.

Adriana completed chemotherapy in January and is now recovering from a total hip replacement she had in March – something that was desperately needed because of the damage treatment caused to her joints.

Adriana enters the room and, as usual, Emily is at the ready with a chair for her to sit in, a stool and towel to elevate her healing leg.

This is only a fraction of her role as a caregiver.

She assists in setting up Adriana’s chair, helps her bathe (their “Johnson & Johnson time”) and has even learned to monitor her Hickman line (a central venous catheter) during treatment.

“(My role is) to be there as much as I can,” said an emotional Emily. “If I could, I would take this from her, but I can’t … I can only be there in any capacity she will let me be.”

“If it’s a shoulder to cry on, if it’s for her to vent, to scream to be a sounding board to be a friend, a mother.”

Both Emily and Adriana have inspiring positivity, but it took trial, error and time to get to where they are.

Emily’s first step was to find acceptance. In the beginning, she allowed herself to cry.

“But I would never do it in front of Adriana,” she said. “If she could be strong, there’s no reason I couldn’t be.”

These moments of despair didn’t last long, though.

“You have to dig deep down and say I have to accept and move forward because if you don’t you will fall into a deep hole - and I would have been of no use to her.”

“As much as she was a grown up and this was her diagnosis … I try and make sure the proper questions are being asked,” she said, adding that she uses the nurses and hospital staff as a resource. “I remember saying from Day One, ‘I’m not out to be a nag, but I’m not out to be anybody’s best friend.’ I just questioned everything.”

TAKE TIME FOR YOURSELF TO AVOID BURN OUT

One of the first things Emily learned as a caregiver was the importance of taking time for herself.

“You focus so much on what the patient needs … that you put your own on a backburner and then all of a sudden it catches up with you,” said Emily.

One month after Adriana’s diagnosis, Emily “crashed and burned.” She got so sick that she had to sleep in the basement and wear a mask around her daughter.

Today, she enjoys “me time” by going for walks, which Adriana is grateful for.

“If the caregiver is always there, they’re not giving the patient their time – even if it’s an hour or so a day,” Adriana said. “They both need their space – and there’s nothing wrong with that.”

The busy mom has also learned that communication is key.

“In our relationship, I didn’t want to come across as overbearing or going into over-protective mode,” she said. “It’s that fine balance of, ‘O.K., I’m not here to check up on you, but in case you need help.’”

As a young, self-sufficient woman, it was difficult for Adriana to ask her mom for help with things like getting dressed – and it was just as difficult for Emily to see her daughter lose her independence.

“I couldn’t go into mommy-control mode and say, ‘let me do this for you.’ Instead it was, ‘O.K., Adriana, let’s communicate,’” she said.

It’s still difficult – even when it comes to small things, like Emily not tucking Adriana’s jeans into her boots properly.

“It took some work, but I think we got through it,” she said.

As Adriana started to feel better, she wanted to go for walks, take drives, meet up with friends and even go to college.

Part of Emily worried, but she instead decided to celebrate.

“For me, these were milestones,” she said. “She was starting to get her independence back.”

ADVISE RATHER THAN INSTRUCT

As Adriana started to feel better, Emily also learned she can’t make decisions for her daughter.

For example, just as she was diagnosed with a collapsed hip, Adriana was set on starting her first semester at George Brown College.

“I could not be the one to say to her she can’t go to school,” said Emily. “It would have been so easy to pull the parent card, but she would have resented me.”

So instead, she let Adriana figure it out for herself.

In September 2016, Adriana’s hip was still stable enough for her to attend classes, but her condition progressed fast. By December, it was clear she needed to focus on healing. School was put on hold. 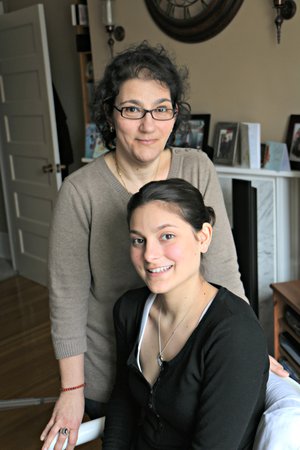 Emily suggests that those in a similar situation access the available resources and support groups.

In their case, Emily and Adriana turned to The Adolescent & Young Adult Oncology Program at Princess Margaret Cancer Centre.

It was there they found out about Wellspring and programs like Look Good Feel Better, which hosts beauty workshops in more than 100 cancer centres across Canada to teach women and teens with cancer the tools and techniques to alleviate the appearance-related side effects of cancer and its treatment.

“I remember just sitting back as a caregiver and … the smile on her face when she was a model and they were teaching her how to tie a scarf - she looked empowered,” said Emily. “These support systems … more people need to know about them.”

Although she was told to ask for help or seek therapy from the get-go, she didn’t think she needed it.

“My focus was (Adriana),” she said. “Then as time went on, you met other caregivers and that was my time to start talking.”

They would strike up conversations in the hospital waiting room or kitchen. They compared stories, tips for dealing with side effects and how to cope.

Adriana rang the Bravery Bell at Princess Margaret Cancer Centre signaling the end of treatment in January. She received a total hip replacement in March, completed physio in the spring and is mobile and back to walking around the city.

While she’s unsure when she’ll return to college, she no longer wants to study hospitality management – she’s instead interested in exploring studies in cancer and nutrition.