My social life: Before and after cancer 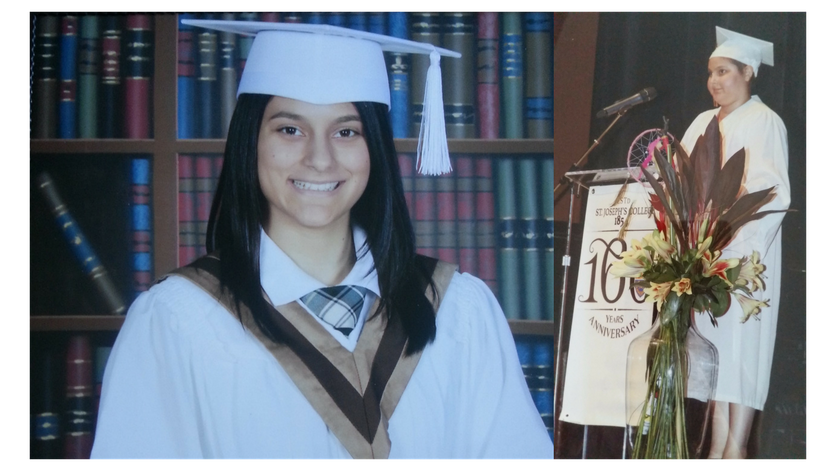 My social life: Before and after cancer

I wasn’t friends with every single student in my high school, but my small group was enough to go out with for lunch, tight-knit enough to confide in one another, and small enough to have unbreakable trust.

I’d like to think I was the right amount of socialable: I wasn’t “over the top” or forced myself to “fit in.”

Going to an all-girls school makes it less intimidating when it comes to making friends because you end up creating a sisterhood more than anything else. So, I kind of just made it work by making small talk in my classes from Grade 9 that carried into Grade 12. My friends would describe me as funny, caring, outgoing, and sometimes a "wanna-be comedian." But hey, I was pretty funny!

I never attended any sort of dance or event through the school because my friends and I would make our own plans to either go to the mall or grab a bite to eat. In my senior year, I decided I was going to attend Semi Formal with my friends. A group of us got into talking about it and that convinced me it would be a great idea. We purchased our tickets, created our group for the table, and waited for Friday, November 28 to arrive. This was my first dance in high school, so I was excited. A friend came over that night so the two of us got ready together. When we officially arrived at the venue, we met with our other friends. We ate really good food, danced to really good music, and made the most of our last high school dance before prom. That night we started to set plans that we would go as a group of girls and make prom a G.N.O. (Girls' Night Out). If prom was to be anything like Semi Formal, I was over the moon excited for that!

But the following Monday Dec. 1, it was all taken away from me by only three words: "You have cancer."

I received phone calls, texts, and a few visits all from friends who gave me nothing but hope, courage, and strength.

“You’ll get through it and I’ll be here every step of the way.”

“When you’re all finished, we’re going to go out and celebrate!”

“I’m not leaving your side!”

These words couldn’t be truer the first few months of my diagnosis.

My school rallied together and made a banner wishing me all the best and fast healing. People whom I hadn’t even really built a friendship with stepped forward to wish me well.

It was overwhelmingly heartwarming to say the least...until it all stopped.

I only kept in contact with maybe two friends until graduation. I was nominated Salutatorian by my classmates so this was going to be the first time everyone saw me up on that stage since I had left - now unrecognizable due to the extra 80 pounds and bald head.

I wasn’t nervous to go. If anything, I felt empowered.

Those of whom stopped talking to me because it became “too much” or “overwhelming” gave me the strength to stand up on that stage and show them that I was still the same Adriana and that even though I felt stigmatized for having cancer, I wasn’t going to let that intimidate me.

Graduation day came and went. People came up and gave me the sympathetic looks or tried to treat me “normal” but, how could they? They had no idea who I was anymore because it had been months since they had seen me.

I left graduation that night with solely the memories that were gifted to me over the years.

It was impossible to think that we would keep in touch as they all went off to post-secondary endeavours.

I kept hearing those words of encouragement in my head but only thought of the false-hope that I was left with.

I don’t blame any of them, though, for leaving and not trying to keep in touch.

I was 18 years old and I couldn’t go to the mall or really go out much so that alone probably turned them off because they were out living their lives.

I didn’t expect everyone’s world to stop just because mine did.

All I wanted from them was the truth – and if that meant telling me that they could no longer be my friend because of my illness, then that’s what I wanted.

As I neared the end of treatment, some friends started popping out from the rocks they were hiding under.

“Hey! You look great! Maybe we should do lunch.”

I sat back reading these messages. Yes, in the bigger picture they were sweet. I never overlooked a compliment or well wishes, but I was kind of flabbergasted at the randomness of these comments.

Was it my looks of being heavier and bald that turned them away or made it overwhelming?

I couldn’t help but to think of it being anything more than an appearance-related reason for them walking away.

In a way, I understand and realize that losing my hair and physically changing made it all more real that I "had cancer.” To them, I was no longer Adriana. I became their sick friend who then turned into their sick classmate, to lastly, just the girl who had cancer that they went to high school with.

I won’t lie and say it never broke me when all my friends chose to walk away after giving me false hope. But it did shape me and help me grow a lot faster than I had planned. If I learned anything from the social aspect of getting cancer it’s that just because your world stops, don’t expect other people’s worlds to stop too. They need to keep living just as much as I do.

We can only be as true to ourselves as we wish those around us to be. If that means having to walk away from people who no longer serve us or help us grow, then that is what we are meant to do.

I lost the friends I was meant to lose and I gained a lot of relationships with people whom I had never thought I would.

I am thankful for all the memories and the good times I’ve shared with all my old friends and wish them nothing but love, health, and happiness.

To all my new friends and the amazing boyfriend who was there through it all, thank you for always loving and believing in me.

“Today you are You, that is truer than true. There is no one alive who is Youer than You.” – Dr. Seuss