My first steps after a total hip replac… 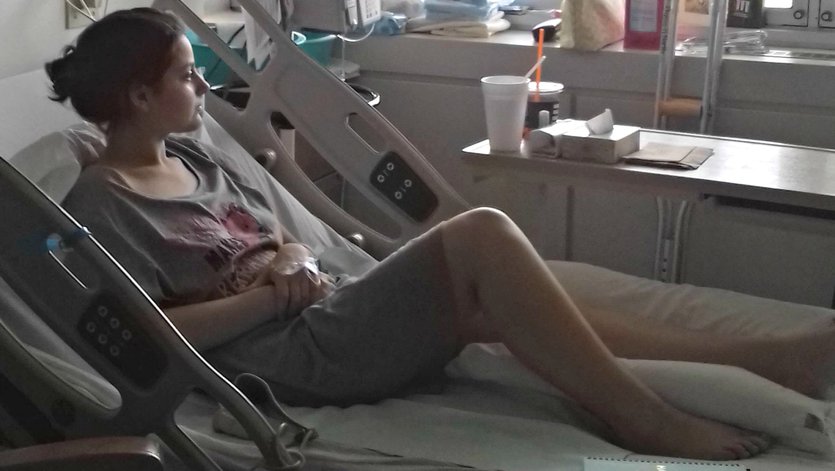 My first steps after a total hip replacement

I spent all of Friday night after my hip replacement surgery throwing up from the anesthesia.

Saturday went by and I felt like absolute crap! I had no energy whatsoever and was still throwing up. I had no appetite especially since I couldn’t keep anything down.

I was supposed to start physio that day. I so badly wanted to get up out of bed, but I didn’t have the strength. I felt like a failure. Although, I wasn’t letting anyone else down but myself. Everyone told me to rest because my body clearly needed it. I was assured that the way I was feeling was normal and that I just needed to sleep it off…which I did.

Sunday morning, was a different day. It was a new day – a new start.

I was taken off of the drug pump which definitely helped with the numbing of the pain and put onto oral morphine and Tylenol Extra Strength. My butt was still numb from the spinal freezing, but I was just happy that I still couldn’t feel anything.

I was feeling motivated. Strong. I was ready to take on this recovery…whatever that meant.

The nurse came in and I asked her if it’d be alright for me to take a shower if she was available. She packed up my shower stuff and clean clothes and rolled me with the commode to the shower room. My mom followed behind carrying all of my stuff.

Now let me tell you that the shower was a production in of itself!

I felt so vulnerable having two people bathe me. Of course, I expected it but I didn’t want to succumb to this feeling all at once.

It was what it was and I had to learn that I would need help for the first while.

I was all clean and anxious for physio to come to my room. I wanted to walk!

I had used the walker early that morning to go to the bathroom, but I wouldn’t even call it a walk since it was only five feet away from my bed.

I wanted to see what this new hip could really do. A physiotherapist came in and was happy to see I was feeling much better. She talked me through what I was going to do and explained that all of these movements were good to do right away to get some movement in the new joint.

She assisted in sliding me off the bed, which was mainly me using my upper body strength to lift myself to move as she just held my leg in mid air.

I made it to the edge of the bed and she said, “When you’re ready, stand up and grab onto the walker.”

I did just that.

I was standing and when I was ready, I had walked over towards to the bathroom door to show her what the nurse had taught me early that morning.

She wanted to see if I was comfortable on crutches and so she measured them to my height.

After teaching me how to walk with them, I made it all the way to the doorway. I felt so empowered seeing the tears in my mom’s eyes.

The physiotherapist was so excited to see me “graduate” from a walker to crutches so soon, she asked if I was ready to walk in the hall.

I was so eager!

After taking about ten steps down the hall, I heard my dad and boyfriend come up from behind. They were so happy to see me walking.

I didn’t feel any pain in the new joint except for the incision which felt sore.

I was courageous enough to make it down to the end of the hall and around.

On our way back towards my room, there was the set of stairs which I knew I would have to eventually learn.

The physiotherapist caught me eyeing them and asked if I found myself ready to try those four steps.

I was honest in my response when I said, “I won’t know if I’m ready unless I try.”

She talked me through what I would have to do and directed me as I made my way. My mom, dad and boyfriend were all taking pictures.

I was going to climb the stairs on my first day of walking. I didn’t know if I’d be able to do it, so after taking a deep breath, I told them I was ready.

The physiotherapist stood behind me and told me what to do as I did it. I repeated that to myself all the way up. I made it to the top!

She taught me how to turn around because now it was time to go down the steps.

Once I made it to the bottom I looked over at my parents who were tearing up.

This is what we’ve all been waiting for.

The limp was gone. The strength and the courage came through.

After making my way back to the room I can see the look in my parent’s eyes. They were so proud. They were so excited for me to finally be pain free.

The physiotherapist helped me get back into bed and taught me some in-bed exercises which I’d have to do three times a day for the next three weeks.

They were a lot easier than I had thought. A little painful at first, but after I got the hang of it, it didn’t seem so bad since I learned how to play around with my pain medication so it would set in just on time.

Now that I knew what the road to recovery looked like, I was excited to do what needed to get done to better myself in the healing process.

Three weeks after my operations, I visited Toronto Rehab where I will now begin my once a week physio classes.

I am blessed to have a great support system who cares and helps me out which makes it a lot easier.

Although it isn’t easy asking for help, I just had to let it be.