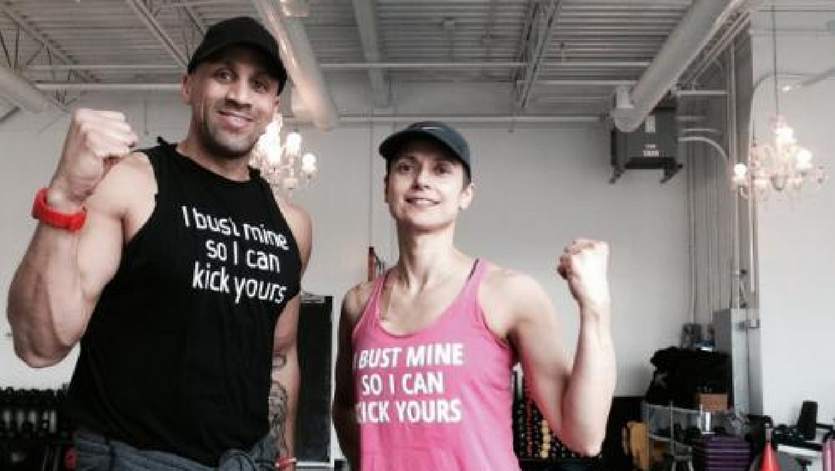 Grit & Grace: ‘Just one more rep’ in support of women with cancer “Laura was strong willed physically and mentally – probably one of the strongest people I’ve ever known,” said Tali Amar, who became friends with Laura after they met in a boxing class nearly 10 years ago.

Before her 2014 diagnosis, Laura completed three triathlons. During two years of treatment the mother of three not only continued her workouts at the gym, but also dedicated herself to logging 1 million meters on her rowing machine.

“I want to say she probably got pretty close to that,” said Amar.

To celebrate her 50th birthday in January 2017, Amar, along with Laura’s family and friends, organized a small fundraiser at the fitness studio and donated about $400 to a cancer-related charity.

This year’s event is in support of Look Good Feel Better and has already raised an impressive $7,000 for the cause. It’s also moved to a larger location at Valleyview Gardens in Markham – a business owned by Laura’s family. The event will include six back-to-back fitness classes from rowing to bootcamps, circuits, strength training, yoga and stretch – all under the palm trees at the greenhouse. “(Laura) was a pretty important part of the studio – she was always there,” Amar said, adding that Coach J is bringing all the fitness equipment to the new location. “She was all about doing one more rep and going a little bit further.”

“I think she would be impressed (by Grit & Grace). She totally would want people to push themselves.”

Amar and other event organizers decided to benefit Look Good Feel Better this year because it was a cause they believed Laura would relate to.

“Hair was a big deal for Laura … she was known for her curly bob,” Amar said. “That was something that she really struggled with – that she was going to lose her hair – so we decided to help Look Good Feel Better because it helps women with hair loss and other side effects from treatment.”

Amar will kick off the event Saturday at 7 a.m. with a rowing class – something she became certified to teach because it was a longtime goal of Laura’s – followed by back-to-back sessions until 1:30 p.m (click here to see the Grit & Grace class schedule). There will be a food truck on site serving breakfast, a live DJ, live artist, photo booth and more throughout the day.

To register for any of the Grit & Grace classes, click here.

Grit & Grace is part of the 25 MORE fundraising community.

For the past 25 years, LGFB has been helping women with cancer feel like themselves again, but we can’t do it alone anymore. Cancer rates are rising in women and we want to be there for those mothers, daughters, sisters, friends and wives – but we need your help to make this possible. We're asking our supporters to organize a fundraising event to help ensure Look Good Feel Better is around for another 25 MORE years. If you're inspired by Laura and Tali's story, join our 25 MORE initiative on Facebook and find out how you can raise much-needed funds for the cause too.