Cane and pain-free: Adjusting to my new… 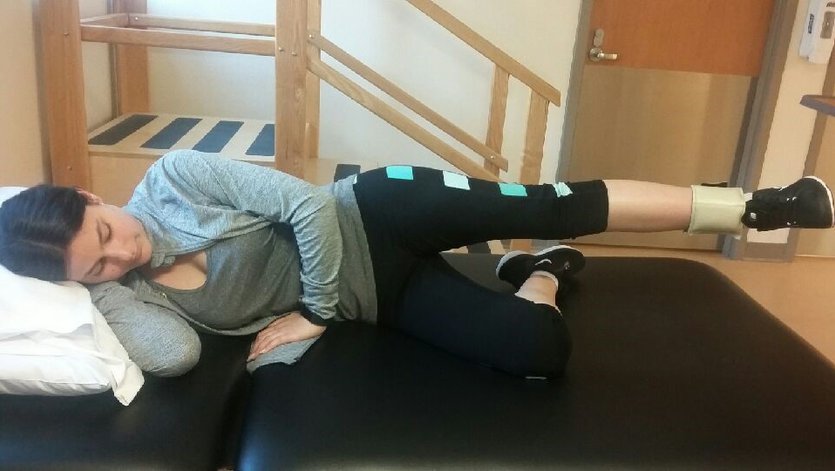 Cane and pain-free: Adjusting to my new ceramic hip

Six weeks after my total left hip replacement and I finally got to see my surgeon.

I have never been so excited for an appointment as I was for this one. This appointment was going to determine whether or not all of my restrictions could get lifted – raised toilet seat, sitting on a wedge cushion, using a cane when I would go out, no bending, no twisting, the fear of sleeping in any other positon than my back...

Don’t get me wrong, it wasn’t that horrible.

It came with its perks of getting out of house chores and such, but I’m 20 years old, I go out. I didn’t want to feel restricted anymore.

I had been doing physiotherapy classes at Toronto Rehab once a week and on my own twice a day at home and they’ve been going well. I was succeeding – the physiotherapists didn’t have any other exercises to give me because of how well I was doing, so I took these all as milestones.

I had arrived at Mount Sinai Hospital that morning for my 10AM appointment and right away they sent me for an x-ray.

I was a little nervous because even though I had done everything that I could to try and not damage it, you never know.

What if I had done a movement and moved it out of place?

What if it wasn’t how it was supposed to be?

What if there was an infection?

I’ve been warned so all of a sudden, these fears came into my head. A few days before my appointment, the site was beginning to itch almost to the point that I wanted to get a comb and scratch it until it went away. It was a little red, too, so of course, I Googled it.

All of these results came up of infections – internal and external – and stories of people having to get their hip replacements replaced! I had known about this but I didn’t want to believe it.

Of course, all this came into my head as I sat outside the x-ray room. I was just glad to be seeing my surgeon that day so I could ask him directly and hopefully put my thoughts to rest.

I had finished my x-rays and went back to sit with my mom in the waiting room. Not long after that we were called into the Fracture Clinic where we would be meeting my surgeon.

A room full of beds – everyone who was there was there for a post-op visit: Hip replacements, knee replacements, hip and knee revisions…it was amazing to see everyone smiling and excited to see their surgeons. Computers at the back of the room had all different types of x-rays for different patients. I was given a bed in the back corner of the room right next to the computers. As we waited, a hip replacement image came up on the screen and I looked over at my mom and said, “Look at how beautiful that hip looks! It’s amazing what science can do these days.”

My surgeon was looking at the screen and then walked over to my bed. He looked at me and said, “Your hip looks great! How are you feeling?”

“Great, actually. No pain – except I have this crazy itch,” I responded.

I pulled down my pants to show him.

Because I’m young, they decided to give me sutures rather than staples which was great because the scar would be minimal. Not that I minded, but it’s bikini season!

Plus, they would dissolve on their own so I didn’t have to worry about anyone picking at my site to remove the staples two weeks after surgery.

I looked down at him, “Um, do you mind if I sit down for this please?”

He laughed and told me to make myself “comfortable”, whatever that meant at this point.

He tugged as much as he could and cut as much of the suture out. I had this sense of relief come over me. The itch was instantly gone and the redness was starting to disappear. He cleaned it up and then sat up to discuss what was next for me.

“Well I think since everything looks great – the incision and the x-ray – that you can go back to normal. You won’t be needing the precautions anymore.” he told us.

I was ecstatic! But also confused so I began to break it down just to be sure what “normal” meant.

In his monotone voice, he looked at me and said, “Everything. You won’t be needing those anymore. As for the gym, take it easy. Start slow – maybe with cycling, the elliptical, an inclined treadmill, and squats to build up your strength again in your hips.”

He laughed and reminded me to take it easy, but it was time to “live life and be normal.”

I hugged him and thanked him for giving me a whole new life. Finally pain free!

For me, this was huge after having pain in my hip for a year.

He said to go back in three months’ time to follow up.

As we walked out, I immediately handed my foldable cane to my mom who put it into her purse.

I was walking on my own two feet more confident than ever.

I had to do exactly as my doctor said, live life…and of course take it easy, but it was time to live.