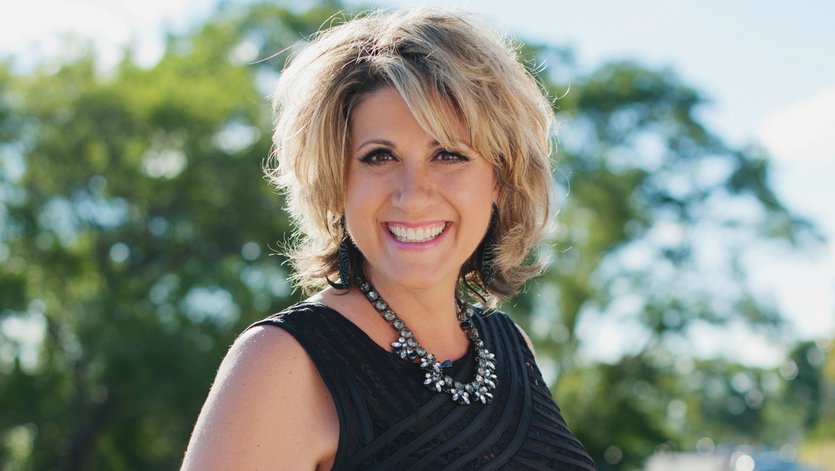 Today, the 48-year-old single mother is undergoing immunotherapy for her fifth recurrence, all while balancing a successful career as a radio show host, stand-up comedian and emcee. She’ll be sharing her story as the host of Mirror Ball, Look Good Feel Better’s annual fundraising gala at the Westin Harbour Castle Hotel on Friday November 10.

However, there was a time she was unsure she’d see these successes.

At the time of her first diagnosis, she started chemotherapy immediately. The cancer was aggressive and her prognosis wasn’t good.

She was working in sales for Corus Entertainment and her dream of pursuing a career as a radio show host and stand-up comedian were on a bucket list in the back of her mind. 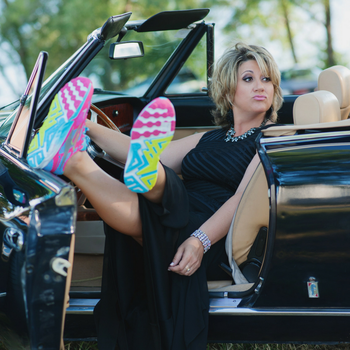 “I always wanted to get back into comedy,” said Carusi.

As she progressed through treatment, she lost her hair and her skin turned “a certain colour of grey” – common side effects of cancer and its treatment.

“You wouldn’t know it was me,” she said.

It served as a reminder of her father’s battle with colon cancer and how difficult it was to watch his disease progress. As a single mother of two young boys – five and eight-years-old at the time – she worried about how this would impact them.

“My five-year-old used to brush my hair every night before bed. I had to tell him, ‘Mommy’s not going to have hair anymore,’” an emotional Carusi said. “My little boys want to look at their mother -  not a cancer patient.”

She also lost hope in her plan to change careers.

“How the hell am I – looking the way I do – ever going to be on TV? Or go up and tell jokes?” she asked herself.

She finished her first round of chemotherapy in September, but recurred shortly thereafter.

It was during that second round of treatment during the fall of 2014 that she was referred to the Look Good Feel Better program at Credit Valley Hospital.

“When I went through the program and I started to recognize myself again, there became hope and things started to be plausible,” she said. She learned how to fill in her eyebrows, recreate the look of lost lashes and find a good wig.

“Nobody thought I was really that sick, because I had great makeup going, I had the good hair, I dressed, I wore jewelry,” said Carusi. “Things started to change when I started wearing makeup … the program, it just gave me the confidence.”

Suddenly she thought, “I can do this – I can turn it around.”

Although her breast cancer has been relentless – five recurrences in three years – she healed herself with comedy and what what she learned at Look Good Feel Better.

She now hosts three radio shows, moonlights as a stand-up comedian and emcee and has a TV show in the works.

“I was so depressed three years ago, but (Look Good Feel Better) gave me hope,” Carusi said.  “If it wasn’t for me looking good … look what I’ve done, it’s keeping me alive.”

Carusi wants to use her newfound platform to share her story and encourage other women with cancer.

“You just need that one person to know that you can turn it around,” she said. “I just want to be that catalyst … as a single mother with limited support – look what I did.”

Carusi hosts Inside Jokes on AM640 and produces The Parenting Show and The Dating & Relationship Show on the same channel. She’s also bringing her story to Look Good Feel Better’s annual fundraising gala Mirror Ball, so she can proudly support the program that played a major role in her cancer experience, spread the word about the cause and thank those involved. Buy tickets to Mirror Ball here.

**All photos courtesy of After Breast Cancer.