Ovarian Cancer Awareness Month: My will…

Ovarian Cancer Awareness Month: My will to live - not just survive

Those of us who have been impacted by cancer readily recognize the rainbow of ribbons designed to raise awareness of the various types of cancer, and we know all too well that each month of the year is also an “awareness month” for one type of cancer or another – sometimes more than one.

It gives us an opportunity to spread the word about all different types of cancer (some of which aren’t very well known), make people aware of the symptoms, foster hope for those living with the disease and raise money to fund research or support programs for those affected by the disease. As a 28-year ovarian cancer survivor, I guess September is my month, and as such, I wanted to share my view on what has become known to many as "the disease that whispers."

Ovarian cancer is known to be a sneaky cancer because the symptoms are often vague, and can be easily passed off as common ailments such as gas, heartburn, PMS or irritable bowel syndrome. Often, by the time these symptoms become problematic enough to make a woman suspect a problem, the cancer has reached an advanced stage. That was certainly true for me.

At just 30-years-old, I was ‘too busy’ to really listen to what my body was trying so desperately to tell me.  And although I didn’t feel well, the symptoms I demonstrated over a nine-month period lead to an incorrect diagnosis of kidney stones.

On a number of occasions, doubled over in pain, I admitted myself to hospital only to be told to go home and wait for the “stones” to pass.

Well, let me tell you, the pain of waiting for those stones to pass almost killed me, quite literally.

It became obvious to me that something was very wrong: I was losing weight, my energy was lagging and I was having intense pain in my lower back.

Despite the many tests I had as doctors searched for the source of the pain, my ovaries were never suspected because the pain I was feeling was nowhere near the tumour sites.

After weeks of inconclusive tests, one morning while getting dressed I found a small bulge protruding from my belly.

It was only then that a possible ovarian tumour was identified as the culprit.

I was diagnosed with a very aggressive form of small-cell ovarian cancer.  It was at stage 4 by the time it was discovered, and tumours had spread, winding their way around my heart, making it impossible for them to be removed surgically.

The outlook was grim.

Only a handful of women had knowingly ever been diagnosed with the same type of cancer as me and there was literally no prognosis.

I was told in September 1989 that I would be lucky to see the New Year.

When I was told that there was no known treatment for my type of cancer, defiance and anger welled up inside of me and I demanded to know how others could give up on me so easily when I hadn’t yet given up on myself.

I was blessed with a brilliant and dedicated team of healthcare professionals who worked diligently to remove the primary tumour from my body.

After chemo successfully shrunk the tumours around my heart, over 100 lymph nodes were surgically removed followed by yet more chemo.

Intense chemotherapy caused every last hair, eyebrow and eyelash to fall out and radiation burned me inside and out.

My treatment has caused some profound nerve damage, requiring me to use a cane and braces on my legs to walk today.

But at every step of my journey, I am grateful to have been surrounded by friends and family that made it their mission to see to it that I felt supported.

I enrolled my friends in everything from chemo duty to providing me with the luxuries in life, like three or four-ply toilet paper, as I spent week after week in the hospital.

No request was too great. 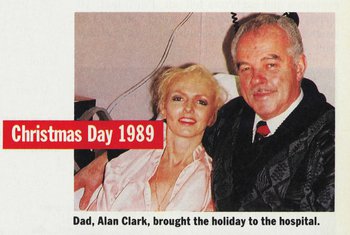 My family brought Christmas to the hospital on a night that they were told I likely wouldn’t live to see the morning.

And my own stubbornness and will to live (not just survive) forced me to grab my wig and my lipstick and check out of the hospital to attend a gala that I just couldn’t miss.

To this day, nearly 30 years later, I firmly believe that in addition to the exemplary medical care my healthcare team provided, it was the tireless and encouraging support I had all around me that allowed my spirit to rally and face cancer – and all its agonizing treatments and the lasting effects that I still live with.

The Other Side of Cancer

As a long-term ovarian cancer survivor, I am thrilled that cancer that once threatened my life is gone from my body.  Even now, two decades after my diagnosis, I am reminded daily of the impact of cancer on my life.  I know without a doubt, that because of the positive support I received, my spirit rallied to see me through the most challenging of times.