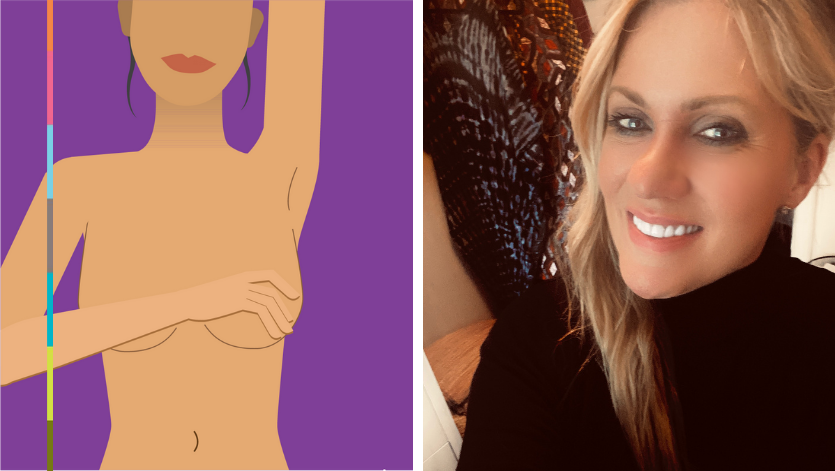 I have battled breast cancer twice. What I did not know during that time, was that my biggest battle was not the recovery from the physical scars, but from the emotional ones. It was only when I believed that I had lost my femininity that I was able to reclaim it and embrace the sexual intimacy I had kept hidden.

Twice a week I took my daughters swimming after work. It was our special time to have fun and teach them something that I always loved. One evening, as I was buckling my 4-year-old daughter into her car seat she said to me “no t-shirt Mommy”.  When I asked her what she meant, she replied: “You’re not sick anymore”.

I had just had my second mastectomy and wore a t-shirt over my bathing suit to hide my uneven body. I remember thinking this was a powerful statement of understanding from my young daughter then, but I now know that it meant so much more. Today I know that it was a symbolic reflection of my battle with my own femininity.

I was first diagnosed with breast cancer at the age of 30. My daughters were 4 and 2 at the time, and it was 6 weeks after their dad and I had decided to separate. What was clear to me leading up to the first very quickly scheduled surgery was that part of my job was to show my daughters, with every action and every word, that I would fight anything that was trying to harm me.

My first surgery revealed that the cancer was more widespread than originally thought. I was faced with making the decision of whether to have a mastectomy as part of my treatment plan. I did not hesitate. I wanted to use every tool I had available to me.  I felt lucky in that my femininity was never defined by my breasts: I was always very “small” in that area. Also, their utility, as mother nature defined it, had come to its natural conclusion. I had breastfed my daughters and that cycle had ended.

My mindset was to fight and move on. After having successfully battled breast cancer, I was re-diagnosed two years later. The only time I recall stopping to think about the effect of the drastic changes to my body was when it came time to decide whether to undergo reconstructive surgery. I ended up choosing to have the surgery, not only for myself, but for my daughters as well. I wanted them to see their mother as feminine and strong but also as “normal” as possible. I did not want them to fear their own bodies. While I was committed to looking feminine, I felt that I had lost my femininity along the way.

But after many years, I started to realize that my resolute determination to move on and be “normal” was holding me back. I started to notice that if a new relationship did not work out, I attributed it to my body, and consequently my femininity. I started blaming my body for failings in love and sex. I started to realize that if I could not be honest or authentic, I could not attract true intimacy.  Further, I recognized it also meant that I had to be vulnerable. To do this, I had to finally look at my body, not as a battle ground, but as a woman who was attractive, sexy and capable of both giving and receiving pleasure. It became clear that I finally had to take my top off and believe that I was beautiful.

On the eve of my first surgery 17 years ago, I promised myself that if I had to have any further surgeries, I would host a party the night before with close friends and family. I am happy that I made this promise because 11 “boobie parties” later, they became an instrumental pillar of my healing process and an important reminder to my daughters that they have an army of supporters around them. At the last of these parties, I gave away nipple pasties to everyone as a party favor. Before long, both men and women were wearing them. Most striking to me was that everyone was wearing them with pride and smiling. I saw body confidence issues in everyone dissolve and, in its place, there was pure celebration.

Today, instead of apologizing for my body or hiding my femininity, I choose now to love it and celebrate it. My surgeries, I now know, did not make me less feminine. In fact, they almost made me more so, because with this re-defined femininity of mine has come the warmth and magic of pure intimacy. I wear what I want – sometimes it comes with a tassel, sometimes with lace. I have met the love of my life and have never felt sexier. My daughter was right 15 years ago. It just took me a lot longer to realize that I am truly not sick anymore.

Andrea Johnson is a global entrepreneur, speaker, storyteller and passionate community activist.  She is the founder & President of Appeeling – a body celebration brand selling fun and flirty pasties that are perfect for every body. Appeeling is a proud supporter of Look Good Feel Better. A portion of all sales during Breast Cancer Awareness month goes directly to support Look Good Feel Better. See more at www.beappeeling.com