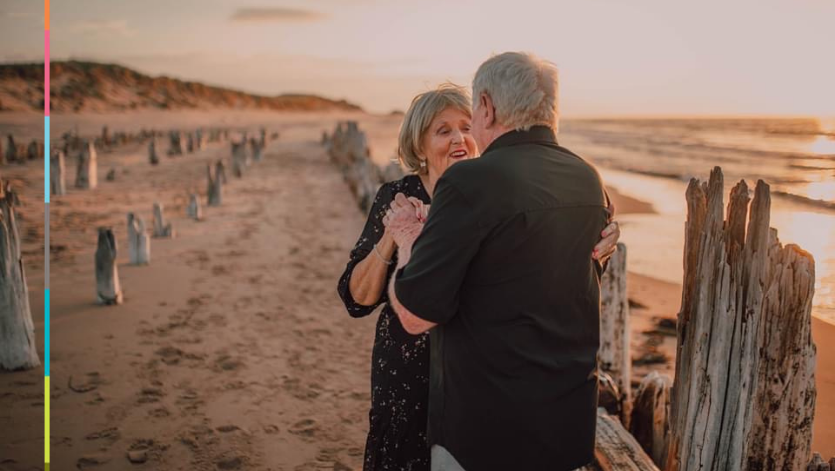 Sometimes, life is a beach. Sometimes, you’re told you have cancer on the beach. While vacationing in Florida with my husband (pre-COVID), I got the call from my doctor that the CT scan I did before our flight suggested I needed an ultrasound. The technician in Florida, who took phenomenal care of me confirmed that it was a tumor. As a retired nurse, I was familiar with what was going on and flew home right away. It was then, after seeing a Urologist, that I was officially diagnosed with renal non-Hodgkin’s Lymphoma.

This is not how I planned my sunbird years to go, but it is what has unfolded. After being diagnosed, I began a treatment program that affected my sleep and weight. Between being restless and anxious the night before treatment to being physically exhausted after, it can really take a toll on your body. I would feel exhausted for weeks after, sometimes lying-in bed and asking my husband, “just a few more weeks then it’s over, right?” This became a question I asked for five  months. Having these little moments with a loved one goes a long way on the journey to get better. As an energetic person, my fatigue really surprised my family. I believe being diagnosed during a time when quality time and physical touch are difficult to come by also really impacted my energy level. A hug goes a long way, even for a strong-natured person like me.

While I often shy away from accepting help from others, just as many women do, I did decide to attend a Look Good Feel Better workshop. I first heard about it through a former family babysitter who volunteered her time at a workshop in the PEI region. I also remembered seeing women going into the room where the workshops were held from my time working at the hospital. What stuck with me was how kind and compassionate the volunteers were, and how positively everyone spoke about the workshops.  Even though the workshops have moved online, I signed up.

My experience did not disappoint! What pushed me to attend was that I knew very little about wigs. I knew nothing! The volunteers were so kind. In my mind, they really went above and beyond what I had even expected. What began with a few questions on wigs turned into me signing up for a second workshop on skincare too. When you have cancer, there’s a lot of things you wouldn’t know until someone tells you.

So, who do you call when you want to know what products to use for your skin? Or what kind of questions you should be asking at a wig fitting? There is no other program like Look Good Feel Better around: a “club” of people who are experiencing something similar to you, with similar questions and concerns as you, all learning how to take care of themselves together. I felt so empowered.

I remember meeting a girlfriend, who also has cancer, for coffee after participating in the workshops and she kept asking where I was coming from ‘all dressed up.’ She wouldn’t believe me when I said I wasn’t dressing up, I just wanted to show I cared for myself and be in the best state of mind. To look good, feel good, and make sure I’m feeling my best.

One gift, double the impact. From today until April 30th, you have the special opportunity to support women facing cancer, like Audrey. Our friends at Cosmetics Alliance Canada. will match your gift, meaning it will go twice as far. *

*Until April 3oth, Cosmetics Alliance Canada will match individual donations, up to $25,000.