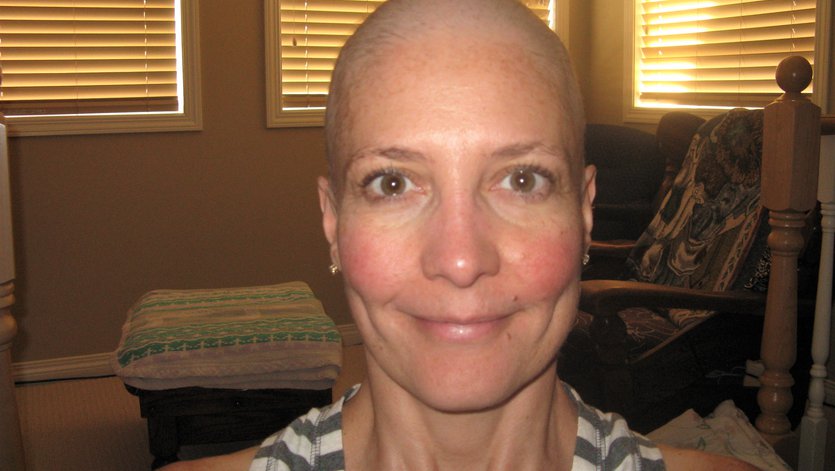 Christine Meikle, an oncology nurse and cancer survivor in Edmonton, is one of those Heroes for fearlessly sharing her story with patients and acting as an ambassador for the program. While Edmonton’s Christine Meikle has been an oncology nurse for nearly 30 years, she never knew much about Look Good Feel Better – until she was diagnosed with breast cancer.

She missed a few mammograms and went for a check-up in 2010. When she saw the results, she “knew it wasn’t good.”

“Sometimes having more knowledge isn’t necessarily a good thing,” she said. “It was surreal.”

When she got the official diagnosis at 41-years-old (about the same age her sister and aunt were diagnosed), she tried to put on a brave face for her children, aged four and nine at the time.

She experienced every emotion, “from shocked, to scared, to terrified,” but ultimately decided, “I’ve got to just fight this.”

She had a bilateral mastectomy, eight cycles of chemotherapy, five weeks of radiation and a complete hysterectomy within two years.

Before her diagnosis, she worked the inpatient unit at the Cross Cancer Institute and didn’t have a lot of involvement with Look Good Feel Better.

She decided to sign up for a workshop to learn more about it. It was the only cancer support program she attended.

She took a friend with her and walked into the room not knowing what to expect.

“The thing that stood out the most was how warm and inviting everybody was,” said Meikle.

She followed along with the Signature Steps.

Already a few weeks into chemo, she couldn’t help but notice her hair falling out as she leaned in to look in the mirror.

As the volunteers went over hair alternatives, she realized she had options – not just with wigs, but hats and head scarfs.

She decided right then and there she was going to shave her head.

She gathered her kids and a few friends for a head shaving party later that day.

“It just made it so much easier knowing that I have choices – I have wigs, hats and so many different ways to tie a scarf,” she said.

Today, Meikle is seven years in remission and back at work full time. As a cancer survivor, she’s an inspiring Look Good Feel Better ambassador and recommends the program to many of her patients.

She shares her workshop experience and explains that it’s much more than makeup.

“It’s almost like a cathartic session,” she said. “You’ve got different ages ranging from very young women to women who are in their 60s … and it’s just a good connecting point with other patients.”

“I can’t say enough good things – those few hours definitely had an impact on me.”

Meikle looks back at her cancer experience as a “learning opportunity.”

“It’s given me a lot – it helped me grow and helped me teach others,” she said. “It wasn’t fun by any means, but it definitely has provided a wealth of knowledge to myself and my family and my patients.”