Help your local Shoppers Drug Mart be a… 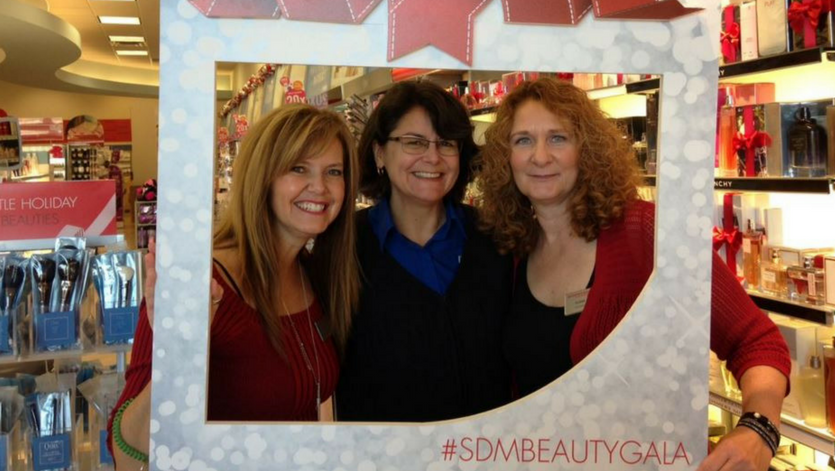 You can support women with cancer in your community by purchasing a ticket to a Shoppers Drug Mart beauty gala on Saturday November 4. $5 from every $10 ticket sold in the Prairie provinces and Atlantic region will go towards Look Good Feel Better, helping women with cancer feel like themselves again.

In 2016, Shoppers Drug Mart stores in the Prairie and Atlantic provinces raised more than $200,000 for Look Good Feel Better at Holiday Beauty Galas.

Stores across Alberta, Saskatchewan, Manitoba, Nova Scotia, New Brunswick, Newfoundland and Prince Edward Island are gearing up to do it all again this Saturday November 4.

We caught up with last year’s top fundraisers to see why Look Good Feel Better is a cause they support. Shoppers Drug Mart’s Grand Prairie store at the Wapiti Centre raised an impressive $15,000 at its 2016 Holiday Beauty Gala – making it the top fundraising team across all Prairie and Atlantic regions last year.

According to Cosmetics Manager Alice Deng, their success is due to the entire staff getting on board.

“We make sure not only cosmetic staff, but all staff in the store get involved,” said Deng. “You really have to get the whole store.”

They not only sell Holiday Beauty Gala tickets, but hold silent auctions, raffles and make a point of asking every customer that comes in if they’d like to make a donation to Look Good Feel Better.

“The people in town are very generous – especially when it’s something they can relate to,” said Deng. “Everyone this day and age unfortunately knows somebody that has had cancer.”

It also helps that Look Good Feel Better is related to what Deng and her cosmetic staff do on a daily basis.

“Being in the cosmetic industry, our job every day is to make people feel good,” she said. “Look Good Feel Better is something that really relates well to something we already do.”

The Wapiti Centre store is holding its Holiday Beauty Gala Saturday November 4 from 10 a.m. to 7 p.m.

This Shoppers Drug Mart team in Dartmouth rallies together for Look Good Feel Better each year in honour of a co-worker who unfortunately passed away from cancer.

“She was a well-loved member of the staff,” said Cosmetics Manager, Sarah Shupe. “The entire store is really on board with raising funds for this really wonderful cause.”

The team not only held raffles and giveaways to raise the impressive funds, but employees at every cash register also made a point of asking every customer to make a donation.

“Even if they were just buying a chocolate bar,” said Shupe. “It all adds up when you’re talking to every single person – those little donations add up.” This downtown Regina Shoppers Drug Mart store has to “think outside the box” to raise money for Look Good Feel Better at its annual Holiday Beauty Gala.

“As a downtown store, our customers mainly shop Monday to Friday,” said Barb Kary, the store’s Cosmetics Manager. “We always had to think … ‘How are we going to raise the money if we don’t have the same amount of customers on Saturday?’”

With the gala falling on a Saturday again this year, the store team hosts fundraising events leading up to the event.

This year, they hosted a chicken and rib night at the Caledonian Curling Club, which saw 180 people attend, raising about $6,000. And they also hosted an in-store “Pin-Up” event, which saw customers come in for a makeover, take a photo with pin-up props and proceeds from the photo purchase went to Look Good Feel Better.

“We get a lot of support from the community and the mall, even customers,” said Kary.

It’s also a cause “near and dear” for Kary personally, as she lost her sister to ovarian cancer.

Her sister attended a Look Good Feel Better work during treatment and loved it.

“She really did enjoy it – it was just good for her morale,” said Kary. “They say it helped them so much throughout their treatment. It just gives them that bright spot,” said Cosmetics Manager Lisa Setter-Johnstone.

Hearing about the impact firsthand is what inspires the Selkirk store to raise funds for the cause at its annual Holiday Beauty Gala.

According to store manager Jim Riley, the impressive fundraising is truly a team effort seen across the store.

“Our staff just feels that this is something that goes hand-in-hand with what we do as a pharmacy and as a drug store and as a cosmetics department,” he said. “Everyone in this world has been touched by cancer.”

A lot of the support also comes from dedicated customers who feel compelled to make generous donations.