How a young teen put her life on hold a… 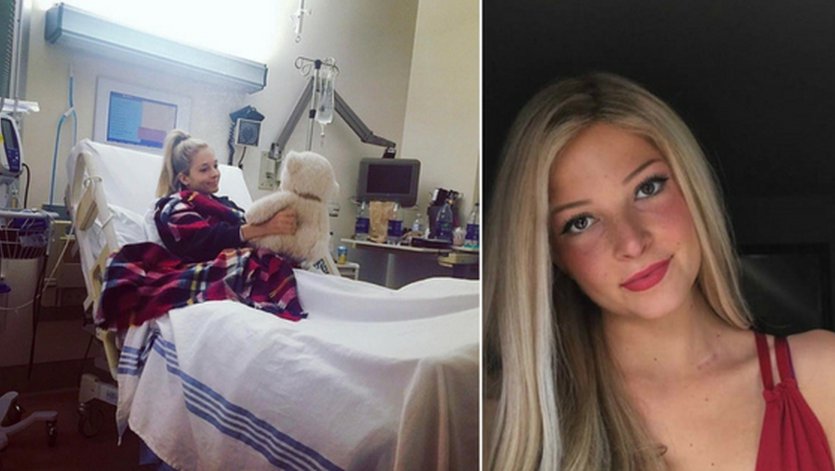 Like most 18-year-olds, Melissa Baker spent the summer of 2016 preparing for her first year of university.

The Branksome Hall grad packed her belongings at her family home in Toronto and was eager for the big move to Kingston, where she’d be studying commerce at Queen’s University that September. But in the months leading up to her move, she started to experience severe back pain at night. She got blood work done, MRIs and cat scans.

After a 10-day stay at St. Michael’s Hospital and on the day she was scheduled to check in to her student residence, she was diagnosed with Hodgkin’s Lymphoma.

She told her mom to head to Kingston and start moving her in. She assumed she’d simply undergo chemo at a hospital near the university.

Soon enough, her diagnosis sank in and she realized she wouldn’t be starting her post-secondary education alongside her high school friends.

“That was really hard for me to come to terms with at first,” Melissa said. “You’re hit with it just one day and they tell you (that) you kind of have to put your life on hold.”

She postponed chemo at first so she could freeze her eggs to preserve her fertility – something she never thought she’d have to consider at just 18-years-old.

Then she began her first of six cycles of chemotherapy. She completed her final treatment on Feb. 22. At first, the teen held onto hope that she’d be the small minority that doesn’t experience hair loss. But as treatment progressed, her hair slowly fell out.

“Every shower was pretty traumatic, because clumps come out and it looks thinner when it’s wet,” she said.

By January she’d lost so much hair she was fed up with hiding it and shaved it off.

While losing her hair was difficult, she also struggles with the dramatic effect the diagnosis has on her social life.

“I just find it very lonely right now, for my age and with my friends gone,” she said. “At chemo I see people sometimes, but nobody talks and they’re all really old.”

The Look Good Feel Better workshop helped fill that gap for her.

She met other women going through a similar situation, and even another girl her age.

“I wish there were other groups (like that),” she said, adding that she’s also found some online communities and resources helpful. “(Look Good Feel Better) is an important cause and I represent an age group that really doesn’t get a lot of attention – it’s always older patients.”

“I want to raise awareness that cancer can happen to anyone, at any stage of life.”

TIPS AND TRICKS FROM AN 18-YEAR-OLD CANCER SURVIVOR:

While she could have dwelled on her diagnosis, Melissa has managed to find the positive – even as she goes through some grueling treatments.

“One year (of treatment) to be cured for the rest of your life is completely worth it,” she said.

She credits this positive perspective to a book she’s found particularly helpful: Don’t Sweat the Small Stuff… and it’s all the Small Stuff: Simple Ways to Keep the Little Things From Taking Over Your Life by Richard Carlson.

Take advantage of the good days:

After a couple sessions of chemotherapy, Melissa got to know how her body handles treatment. Her best days are those leading up to her next chemo session, so she takes advantage of that time by going for a workout or hitting her favourite restaurants (especially since her stomach is sensitive after chemo).

Battling cancer at a young age means Melissa often feels isolated. With her friends away at university, she keeps in touch via social media, like Instagram and Snapchat. It makes her feel more involved.

With her friends living hours away, Melissa finds she gets bored being on her own. To pass the time she took up cooking – something she never did throughout high school.

“It really helped me because it takes time, I personally find it fun and you get to enjoy a meal with your family at the end of the day, which is pretty important,” she said.

Appreciate the boredom from time to time:

“Every day is just about trying to feel O.K. – you really appreciate the days you feel healthy,” said Melissa. “If I’m bored one day, that’s a good thing.” WHERE IS SHE NOW:

Having just completed her final treatment, Melissa is focusing on getting back to “normal.”

She tries to visit her friends at Queen’s when her blood count allows it and she’s also picked up a part-time job as a hostess at a restaurant.

Depending on whether she needs radiation after chemotherapy, she’s planning to attend Queen’s University in September.